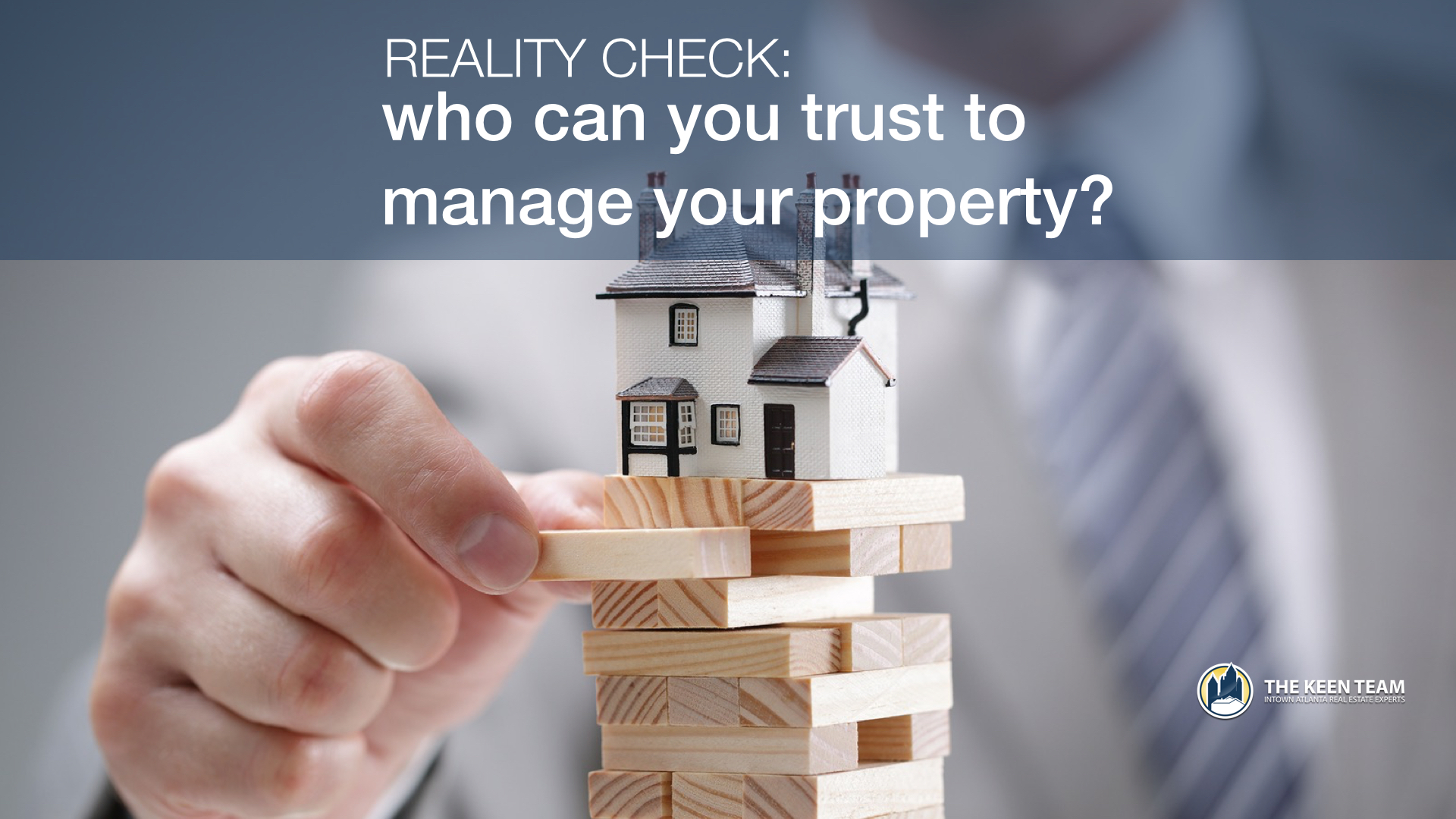 Property management, in its broadest terms, is the oversight of real estate. This can encompass everything from single family homes to large, multi-unit apartment complexes.

Property management is a service provided by local real estate firms who do their best to manage your assets. I don't have to tell you there's a significant range of quality and professionalism in the Atlanta Property Manager you chose to work with.

Before you invest your hard earned capital, you have to ask the question – what Property Management approach and methodology works to the benefit of your business?

Understanding the Purpose of a Property Manager

There are a number of reports and studies circulating on the internet and in the media about Americans’ lack of retirement planning. A survey conducted by LIMRA, a financial services trade association, showed that approximately 49 percent of Americans say they aren’t contributing to any retirement plan. (1) While this trend isn’t exactly new, it’s still a concern considering that retiree health care costs have increased an average 6 percent a year since 2002, according to a study by Fidelity Investments. (2) Additionally, according to a new Gallup survey, Americans’ expected retirement age has increased from 60 to 67 over the last decade and a half. (3)

It’s clear that saving for retirement has become more important than ever, but many pre-retirees wrongly assume that when they reach 65, Medicare will be able to cover most of their health care expenses. Unfortunately, this just isn’t the case, and many Americans are forced to continue working past age...

If you’ve been considering investing in Atlanta real estate, you’re in good company! Existing home sales are up in January for the third month in a row. One out of every four buyers were investors. The difference between them and you? They took action!

Still not convinced? Here’s what Warren Buffett recently had to say about residential real estate: “I think it’s about as attractive an investment you can make.”

Are you really going to let this incredible opportunity pass you by while others are building their wealth through real estate?

Cash flow for a real estate investor is what he or she earns after paying all the expenses related to the property. For example, if expenses are...

There is a way to defer the taxes on the "sale" of a property being used or held for investment purposes or trade. Its referred to as a Tax Deferred Exchange. You may also hear it called a "Deferred Like-Kind Exchange" or a "Section 1031 Exchange" or a variety of other terms; we're going to stick to tax deferred exchange or TDE. First, let me say that you must use, by law, what is called a "qualified intermediary" to complete a TDE. Its also highly recommended that you have an attorney that can explain the legal aspects of the exchange.

In simple terms…you can defer (postpone), and in some cases, eliminate the capital gains tax on an investment property you're selling. The catch? You have to be purchasing a "like-kind property" to "replace" the one you're selling. In short, its the simultaneous to semi-simultaneous swap of one property for another. This allows you to maintain more of your money to put into a replacement property. I'll go into detail on the definition of "like-kind"...

To better serve the needs of real estate investors throughout the Metro Atlanta market, I recently earned the Certified Investor Agent Specialist™ (CIAS) Designation. With the CIAS, I have the training, tools and calculations to effectively serve the five investor types: First-Time Investor, Move-Up Investor, Portfolio Investor, Performance Investor, and Rehab and Resell Investor.

Real estate represents a consistent and stable way to build wealth, brings liquidity to our housing market, and stimulates our local economy. In fact, in the past year, investment and second-home properties represented approximately 27% of all residential sales. It’s also worth noting that nationwide, 43% of real estate investors earned less than $75,000 per year.

Today, real estate is quite literally on sale! There is an unprecedented opportunity to build wealth through real estate, and I specialize in helping all investors achieve their goals....

Will You Retire in Style?

Or will you bag groceries at Publix?

Have you ever been in the check out line at your local grocery store and noticed a Senior Citizen bagging your groceries? I have. And it breaks my heart everytime.

Do you think that old man checking receipts at the exit of Wal-Mart dreamed of a day when he'd use a yellow highlighter and a polite nod to earn some extra cash to help pay the bills?

Can you picture him in his 20’s, 30’s, 40’s or 50’s just waiting for the day when he can retire with dignity at the end of a check out lane in an apron asking whether you prefer paper or plastic?

Of course, I'm being funny ... but there's something serious for us to all consider. We're here enduring the worst economy since the Great Depression.  Millions have lost their jobs, healthcare costs are skyrocketing and our "nest eggs" are worth a fraction of what they were valued at just a few short years ago.  Now...

Buying Real Estate is a Smart Move in a Bad Economy

I've recently read a ton of news articles and heard a number of folks on news shows talking about why it may not be a good idea for you to buy a home right now. I say FALSE, and so do many who understand not just the financial gain found in home ownership but the quality of life and pride that can be gained as well. A recent article written by Ron Lieber in the NY Times (http://www.nytimes.com/2010/08/28/your-money/mortgages/28money.html) mentions a few reasons why buying is still a great idea. I'll touch on his thoughts and then share a few of my own. Its worth noting that I bought my first home in March, 2010 at the age of 26.

Have you heard that is a buyers market? If you have a stable financial situation, there will NOT be a better time in your lifetime to buy a home. Its as simple as that. Try the NY times "Rent Versus Buy Calculator (http://www.nytimes.com/interactive/business/buy-rent-calculator.html) to...

It's a testament to the quality of 60 Minutes that nearly 2 years after it was first recorded in December of 2008 this 12 minute prediction of what will come to pass has ... well ... come to pass.

We're entering the 4th quarter of 2010 and we are, without a doubt, heading right into the second wave of the Atlanta Foreclosure crisis.

All right. All right. All right. It's Tuesday, September 21st 2010, and we've got fourteen (14) new Atlanta foreclosures and short sales to hit the market in the last 24 hours. A little something for everyone in today's episode. If you're looking for a solid deal in a great neighborhood you should check out this episdoe. Investors might want to take a closer look as well.

All right. I'm back with the weekend listing activity where I cover all the latest Atlanta Foreclosures and Atlanta Short Sales. As usual, we've got light activity over the weekend with just three (3) properties to hit the market.

And they're all worth a closer look...

We just completed our first full month of programming here at IntownDailyForeclosures.com and RealSourcebrokers.com so I thought I'd do something a little different to finish out the month of August. So as part of my ongoing comittment to provide the most comprehensive and up-to-date analysis of the foreclosure and short sale market here in Atlanta I'm providing this recap of the listing and sales activity in in the distressed market for August 2010.

How Do Short Sales Work?

It's Monday, July 26th 2010 and with just two (2) new distressed properties to hit the market this weekend I'm going to spend some time schooling you on the three (3) types of short sales and the two (2) very different types of agents that work them.

Here's a fact: if you're currently in the market to buy a home (whether your a first time buyer, investor, luxury home buyer, condo buyer, loft buyer ... you get the picture) you NEED to know how short sales work.

So ... if you have questions contact me. I'll answer them.

Welcome back to IntownDailyForeclosures.com® - your source for daily Atlanta Foreclosure information with expert intrepretation.

Remember the mico machine guy? Today's episode reminds me of that.  But different.

I am your host, Joshua Keen, and this is your source for daily Atlanta Foreclosures and Short Sale information with EXPERT intrepretation.

We've got eleven (11) new properties on the list so let's get started:

A little something for everyone in today's episode ... from move in ready to complete rehab. If there is anything on today's list that you want more complete information or would like to arrange a time to see the interior of any home on the list - contact me today.

In addition to residential sales, my team is heavily involved in helping investors profit by investing in foreclosure properties. Mainly by purchasing small single family homes in Atlanta foreclosure market at 60% to 70% of future value, rehabbing them, and quickly reselling them for a healthy profit. Most of these properties are in blue collar neighborhoods that we resell to first time buyers using FHA insured financing. Most of the foreclosed properties we purchase were also financed by FHA insured mortgages.

The one wrinkle in this buy, rehab, and resell process was the arcane Housing and Urban Development anti-flipping 90 day rule 24CCFR 203.37a(b)(2). This rule "provide that a rehabbed property would not be eligible for another FHA insured loan if the contract of sale was executed within 90 days of the prior acquisition by the seller and the seller was not exempt from this rule". What this meant in plain non-bureaucrat English was that if an investor purchased the property for rehab and flip, an FHA buyer...

Political tags - such as royalist, communist, democrat, populist, fascist, liberal, conservative, and so forth - are never basic criteria. The human race divides politically into those who want people to be controlled and those who have no such desire.

I urge you to read, watch and take action.

The Case-Shiller data for October was released today.

The good, the bad and the ugly news: depending on whether you're a buyer/investor (good), seller (bad) or lender (ugly) we have seen prices this low since May of 2001.

According to the most recent report from Equity Depot (an Alpharetta based firm), the Atlanta real estate market had a record setting 117,107 foreclosures notices filed in 2009.  That's a near 50 percent increase over the previous record in 2008.

The report goes on to disclose a 10 percent increase in foreclosures compared to November (month over month) and ... get this ... a whopping 77 percent increase over December 2008 (year over year).

Gwinnett county led the pack with 2,074 foreclosure notices, close behind sits Fulton county at 2,006 notices.  Dekalb county figures came in at 1,568, Cobb at 1,203 and Clayton lagging behind major metro counties with 866.

Well ... on top of the already battered residential real estate market ... the increase was spurred by a weakening commercial sector.

The If and When of Recovery (video)

It's worth taking a look at this recent Wall Street Journal interview with Real Estate expert John L. Burns.

Mr. Burns confirms a lot of what I've been predicting for months now for the 2010-2011 Atlanta real estate market.

In the video he explains why FHA loans and migth contribute to a prolonged recovery.

Here are a few reasons why 2010 will not be the year of recovery: